It's late and I won't post a long one, and no pictures, but I decided to write about Stuart Scott.  The first time I saw him on Sportscenter I wasn't sure if I liked him.  I never saw him on ESPN 2 or before that (our cable company was horrible in the 90's), but I was use to Dan Patrick, Keith Olbermann, and Craig Kilborn.  As time went on he started to grow on me.  He wasn't the first to make The Big Show exciting or to use catchphrases, but he didn't seem to tell sports like it was a chore or a job.  He showed passion, even if I didn't get all the expressions.  It was the mid-late 90's Sportscenter broadcasts that really wanted me to get into broadcasting, journalism, or something to that affect.  I never understand why most sportscasters couldn't make telling sports fun.  Most announcers lacked passion.  Then there were some that substituted passion for yelling.  You don't need to scream to tell news or sports, you aren't Gilbert Gottfried (sorry, I just watched Celebrity Apprentice, Johnny Damon is on).  Stu made it fun to see the scores and highlights.  As a matter of fact, he made it so fun, that I didn't have to read the boxscores the next day in the paper.

After everyone left or went to different areas, Stuart was a constant on the nightly broadcast.  He anchored with Rich Eisen, Steve Levy, and a plethora of others, but it was Stuart you watched.  As I got older my need to see nightly highlights faded, but it was always good to see him on.  His popularity even scored him some cameos in movies, and a parody on Saturday Night Live (Tim Meadows at his finest).  I reworded a quote from Field of Dreams earlier today thinking about Stuart at ESPN and Sportscenter.

People will come. They'll watch Sportscenter for reasons they can't even fathom. They'll turn up your driveway not knowing for sure why they're doing it. They'll arrive at your door as innocent as children, longing for the past. Of course, we won't mind if you watch, you'll say. They'll watch without even thinking about it: for it is joy they have and peace they lack. And they'll sit on the sofa every night. They'll find they have reserved seats somewhere on the cushions. And they'll watch the show and it'll be as if they dipped themselves in magic waters. The memories will be so thick they'll have to brush them away from their faces. People will watch. The one constant through all the years, has been Stuart Scott. America has rolled by like an army of steamrollers. Sportscenter has been erased like a blackboard, rebuilt and erased again. But Stuart Scott has marked the time. This show, this man: it's a part of our past. It reminds of us of all that once was good and it could be again. Oh... people will come watch. People will most definitely watch.

People watched for the highlights, but stayed for the catchphrases.  "Cooler than the other side of the pillow", and of course, "BOO-YAH"!  Stuart was the glue that held it all together.

It was sad seeing the story told by Robin Roberts this morning and seeing Sage Steele and Rich Eisen crying.  It was sad hearing Steve Levy saying because of cancer "he was a shell of what he was, but you could never tell on camera".  To Stuart, unlike a lot of the other anchors, it was never about him.  Sure he tried to make a name for himself, but unlike others, he didn't use ESPN as a catapult.  To him, this was his dream job, it was everything he wanted.  There was no need to climb higher, he was at the highest peak.  It was about giving a great product to the people who watched.

I said it was a Dream Job for him.  Oddly enough, he actually hosted a show on ESPN called that.  I knew one of the contestants on season two of the show (I had met her, I am facebook friends with her, I don't talk to her much).  I was curious to see what she had to say, but she hasn't posted.  I'm sure it would be something nice.  I haven't heard any negative things about Stuart so it would be a shock.

Cancer always pulls at my heartstrings.  I have been surrounded by it, but one thing that most people who have it has shown, just like Stuart is that they never let it define them.  They never give up.  Stuart didn't give up.  He fought it multiple times, and this sums it up. 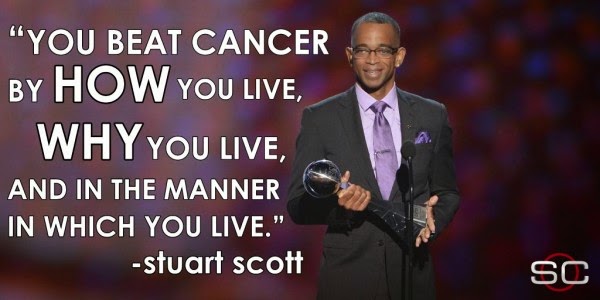 Thank you for reading, think of those who have cancer, or have passed from it, and think of how they defied it.  Don't think that cancer beat them.  Have a great night.