Put Your Name on it

A long time ago I had a boss who was really nice.  Sure we butted heads, but unlike other bosses I had, she never got on my nerves much.  She did sometimes, but she never really ticked me off.  The reason I bring her up is because she is the inspiration of a new series I plan to do on here.  I hope to have it featured on occasion, but let me begin with a bit of background.

While I would work, usually the overnight shift, we would be talking and she would talk about owning up to mistakes or standing up for yourself, or just telling the truth, and she would say "Don't be scurred, put your name on it."  I should point out to those who may not know (and I might have misspelled it), scurred is essentially a variation of the word scared.

This blog isn't about standing up for anything, it is about autographs I have gotten and will showcase from time to time.  I plan to show autographs whenever, but some I thought I could post on here in this feature.

Today I will be showing off three autographs I got at a wrestling show almost 10 years ago.  The promotion is called World League Wrestling, or WLW, and is based out of Missouri.  Within the last year or two they moved from Eldon, MO (which is close to the Lake of the Ozarks), to Troy, Missouri which is fairly close to St. Louis. Beginning in 1999, WLW is owned and run by the legendary Harley Race who was born in Missouri.  WLW has a lot of shows in Missouri and most of them are tied to a local charity or fundraiser.

The event I went to was in the town next to me- Boonville, MO.  I went with a good friend of mine, one of my lifelong best friends who is also a big wrestling fan.  He had never seen an indy fed show before, and this was my first WLW show, though I knew quite a bit about them from the internet.

The show itself I thought was fun, and some of the wrestlers were better than I thought.  I wished some of them would have gone on to be bigger names.  One of them did however.  Trevor Rhodes was this redneck wrestler that was pretty talented.  A short while after seeing him, he was signed to WWE, where he would be renamed Trevor Murdoch.

In total, I got four autographs, but as of now only have three scanned, so those are the ones I'll post. 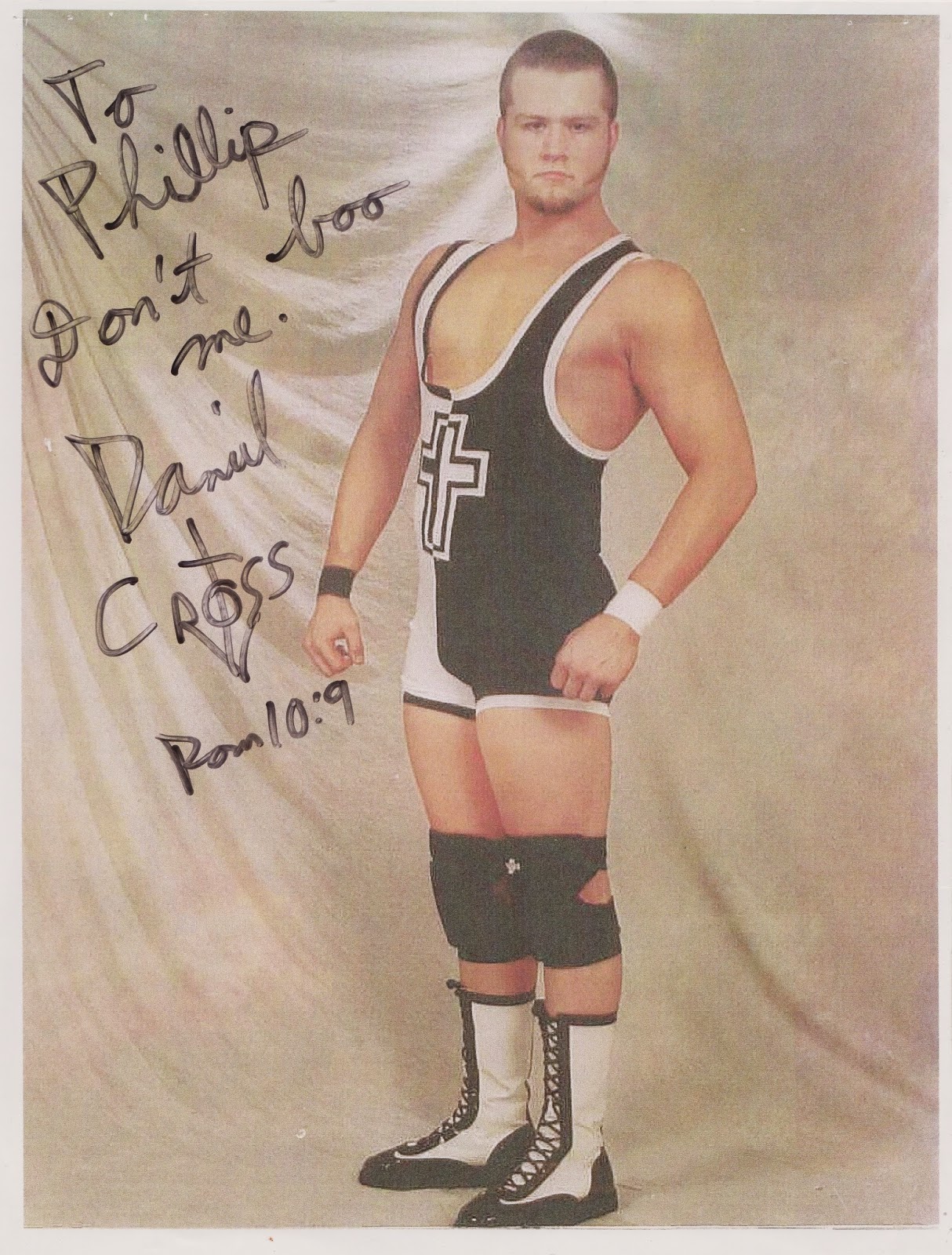 The first autograph I got was of one of the active wrestlers on the roster- Daniel Cross.  He was from Concordia, MO, which isn't real far away, so it was a bit cool to meet him.  I thought he was really talented, and he was nice when I talked to him.  He signed it with "Don't boo me" which was fun because he was a heel.  He also signed it with a Bible verse, which I asked him what the verse was.  I think he was surprised someone would ask him, to which he replied- "uhh, I, uhh, I forgot".  As I inched closer to the next person in the autograph line, he looked at me and said "OH, IT'S..." and then recited the verse.  I thought it was nice because he spent a few seconds to think about it, when he could have just blew it off.

The next person in line was also really nice. 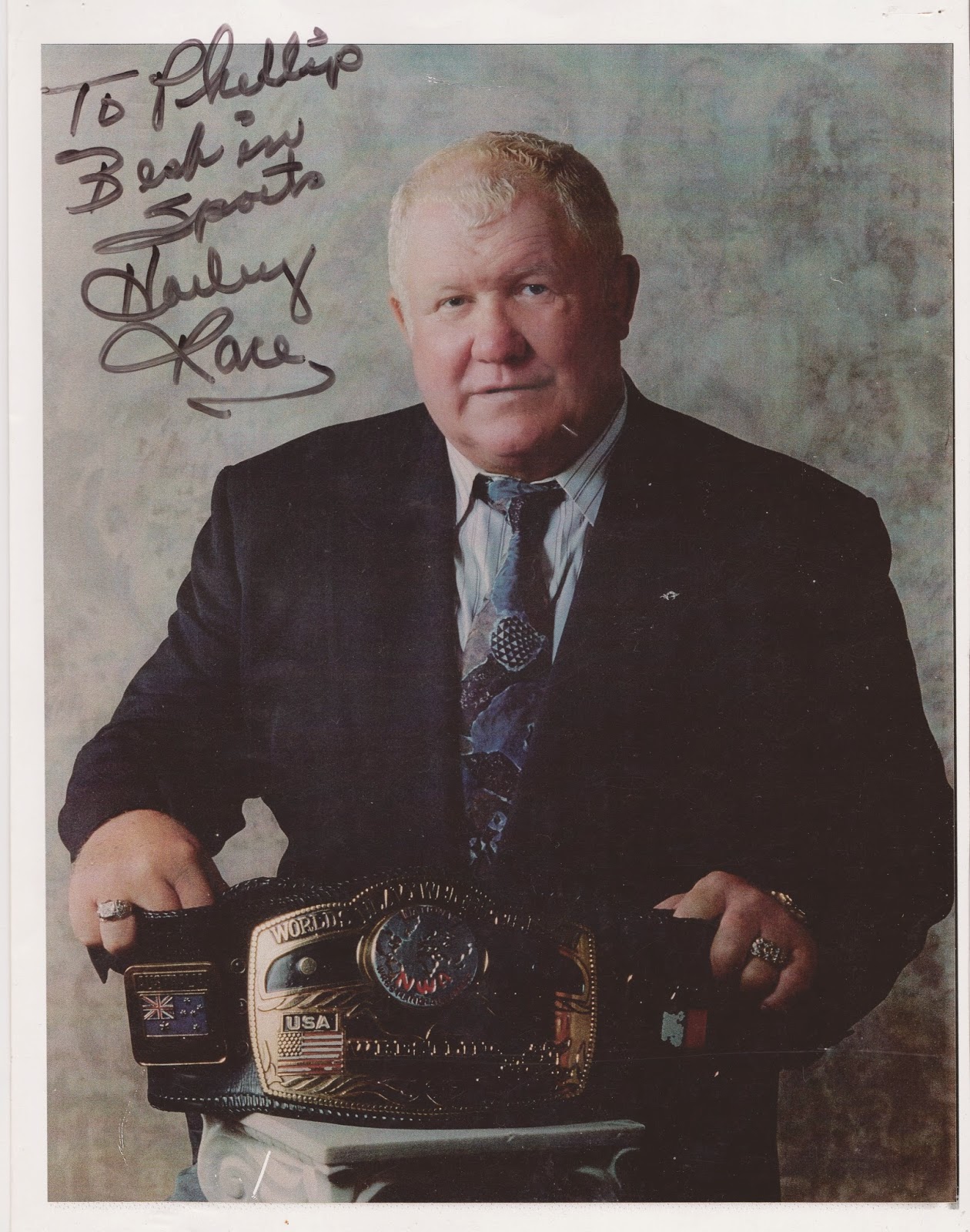 IT'S THE LEGEND HIMSELF!  To be honest, if you go to a lot of WLW shows, its not a shock he signs autographs.  He is a very nice man, but I've heard stories if you ever attend his training camp, Mr. Nice Guy won't be around, he'll be tough as nails on you.  I was happy to get his autograph because my dad told me stories that he had seen Harley Race wrestle when he was younger, so it was someone I could always like with my dad.  I missed most of Harley's wrestling days, but I did remember his time in WCW in the early 90's where he managed Vader among others.  I like how he signed "Best in Sports" when by the time he signed it I was in my early-mid 20's so my best days were well behind me.

As I write this, I realize I may have the order of the autographs mixed up, I apologize.  I wasn't going to name the autograph I don't have scanned, but I might as well.  This was a stacked show with two special guests, and one of them was Mick Foley (aka Mankind, aka Cactus Jack aka.... we could go on all day).  I'll write about him and show the autograph at a later date.

The last autograph to show today was one I was really happy to get.  Now I know that Mick Foley charged for his autograph (which most special guests do at these shows, and Harley may have too).  I didn't know that at the time, if I did, I would have brought more money, but I only had a few bucks left, and as a result almost missed the last autograph. 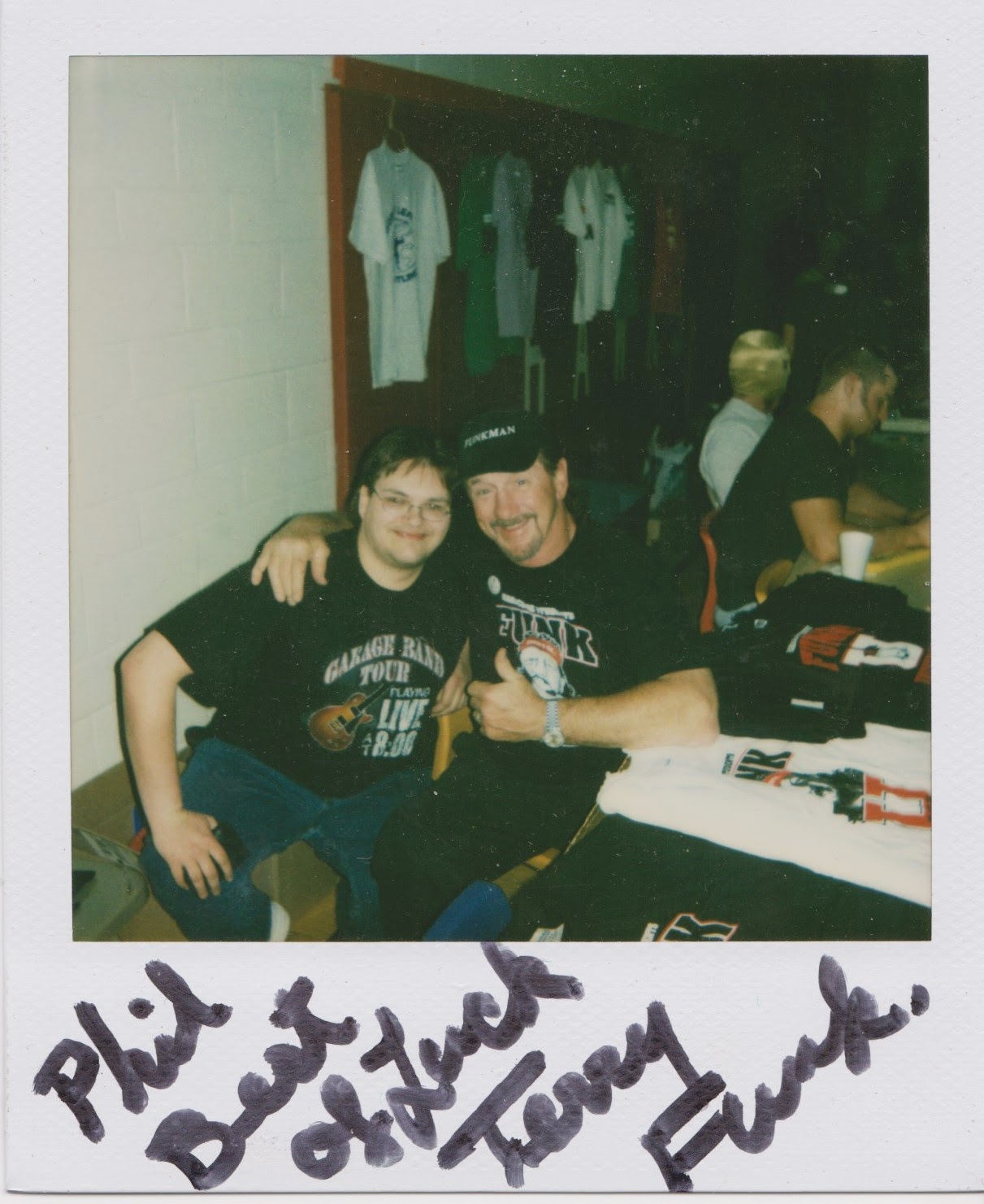 THAT'S TERRY FUNK!  If I had more money, I would have bought his book and had it signed.  Looking back, I'm almost happier I didn't because I wouldn't have gotten the picture with him.  He was really nice, and as a result, one of my favorite autographs I have ever gotten in person.  Most wrestlers take pictures with these cameras and charge a couple bucks, and they make good money on them.  After I got this picture taken, I referred to the shirt I'm wearing in the picture as my "Terry Funk shirt" for many years.

I never got to see a lot of Terry Funk matches, but I did remember him in his time in WCW, and thanks to Youtube, I got to relive some classic moments he had with Jerry Lawler.  I don't think Terry Funk gets the credit he deserves as he could really tell a story.  However, he is now in the WWE Hall of Fame, so I am even happier I got my picture with him now.

WLW still puts on shows today, they started in 1999, and just announced some new shows.  You can check them out at Harley Race's website.  They don't have as many special guest these days, but still have shows with big names.  He also holds a yearly training camp where he gets some more known wrestlers to help.  He had Bobby Eaton last year and William Regal a couple years ago.  Many names have been through the doors of WLW, and currently Miss Natural (daughter to former wrestler Ken Patera) and Brian Breaker (who was in NXT for a short while).

Among the alumni from WLW:  Trevor Murdoch, Ted DiBiase Jr., Curtis Axel, Ace Steel, Din T. Moore (recently seen on ROH as the Beer City Bruiser), NXT's Simon Gotch, and referees Ryan Tran, and John Cone.  Many more names have been through the doors, and they have had tons of special guests in the past as well.

If you are a wrestling fan and you never have gone to a smaller federations show, you should try it.  I have a blast at the ones I go to, and I hope to make more of them soon.