Maybe there are still a few months left of 2014, but as I prepare for baseball season to end and football season to begin, I bought what was likely one of my final packs of Topps baseball cards today.  I was at a my local Casey's General Store (for those who don't know what a Casey's is, its like a 7/11 or BP) and looked to see what kind of cards they had.  I think I might be the only one who buys cards from there, but sometimes others must, because there were only 3 packs left today and I haven't been there in a while.  The only reason I buy cards there is because sometimes I need a fix, and they are the only place in town that sells any.  The selection is poor as you would expect from a general store, but I but a pack here and there.  They usually have a box of some gaming or My Little Pony or whatever kids would get (sometimes they have Garbage Pail Kids, but I never got into them).  I pass on all that.  They usually have at least a box of baseball and a box of football, and probably thanks to me, they carry WWE cards (I skipped most of them this year because I hated the Best of 2014 cards and boycotted them).

So I thought I'd share my results.  I had no expectations really, but have been lucky and pulled some good cards in the past, so who know, maybe I could find something good. 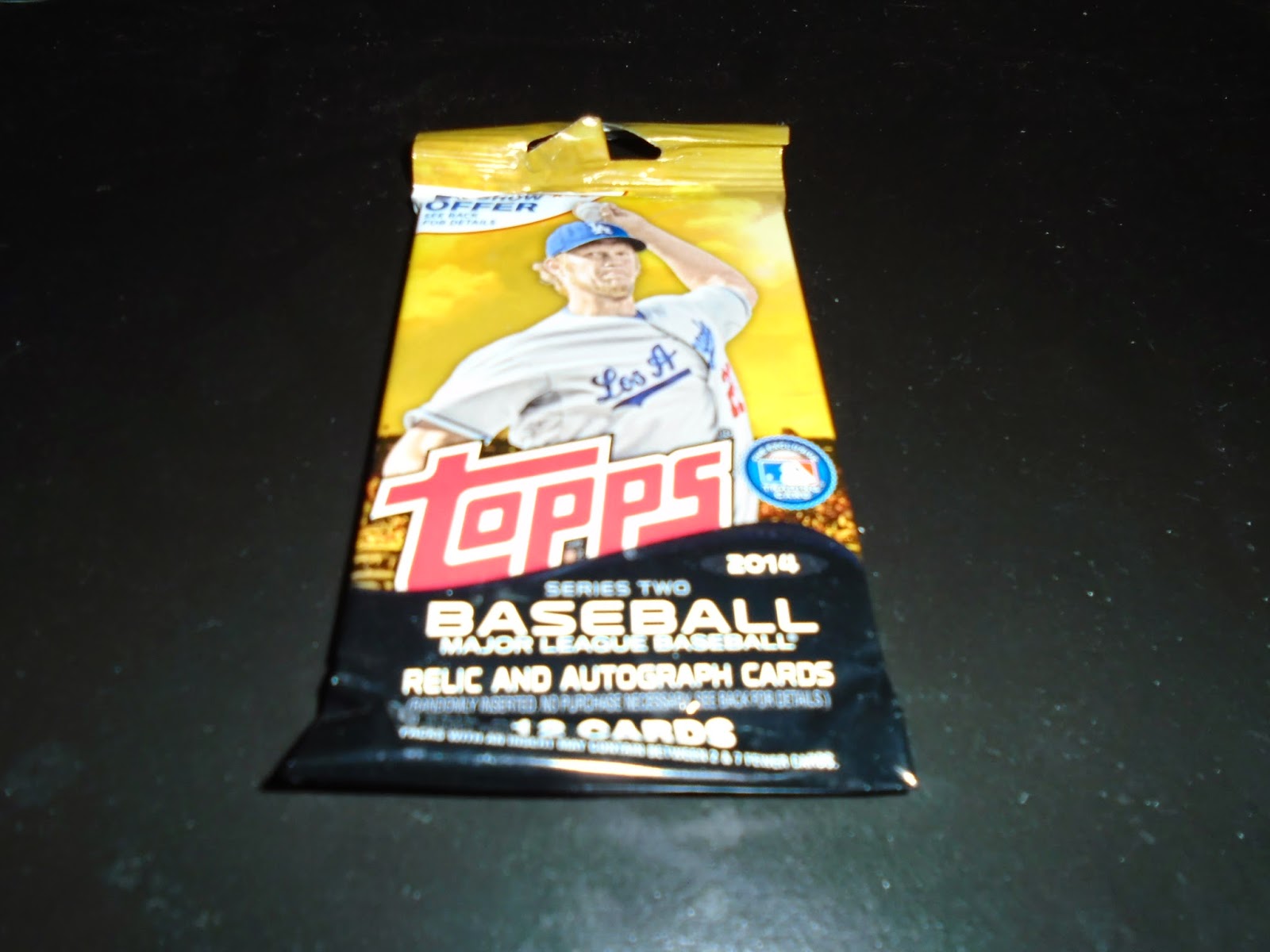 First off, you'll notice that these aren't even the update series but series two cards.  Since I have all the Royals cards from series one and two, maybe I could get an insert that I don't have.  Anyways, lets begin. 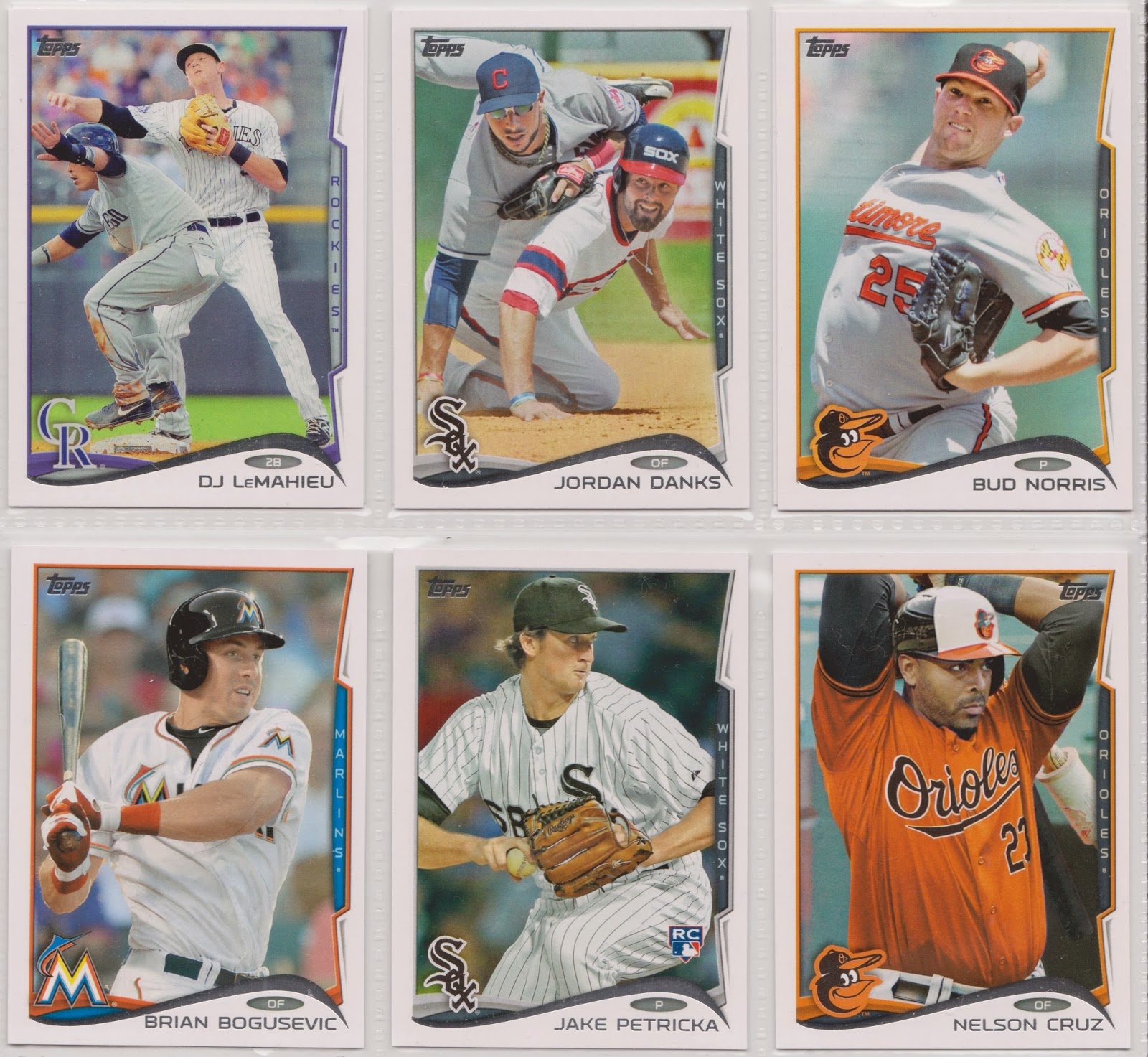 I've said this before and I'll say it again- 2014 might be one of the best sets in years.  I love the design.  Anyways, so far the cards are good.  At least I have heard of all of them.  It's weird seeing Cruz in an Orioles uniform.

Ok, I heard of these guys too.  Not really a bad pack, just not any I needed.  Eric Young Jr. is another player whose father played in the majors, I just didn't include him in yesterday's post.

I really like the Justin Masterson card.  It's not everyday you see the batter in the same card as the pitcher delivering the ball.


Ok, so we got through the base set cards, its time to see if I got any million dollar cards.  Well, make that five dollar cards.  Alright, see if there are any cards that make the pack worth buying.

Not a bad Hamilton card, and yes it is a base card.  I always liked the Angels, and sometimes I root for them especially since they have Pujols and Freese.

The Juan Uribe card is ok, I'm just not a fan of the SaberStars insert cards.  I like the design, but not a fan of the whole "sabermetrics" stuff.  Don't get me wrong, I love stats and strategy and all that, but in the end, the game is played on the field, I don't want too much strategy and stats clogging up my enjoyment of the on field product.  Leave that to the managers and GM's.

The last card in the pack is a Rick Porcello gold insert.  The gold cards always look good, but I never got why the gold cards were #'d so much higher than the other ones.  Plus I liked it better when there were only gold and maybe red and blue variations, I don't need 15 different cards with different borders. 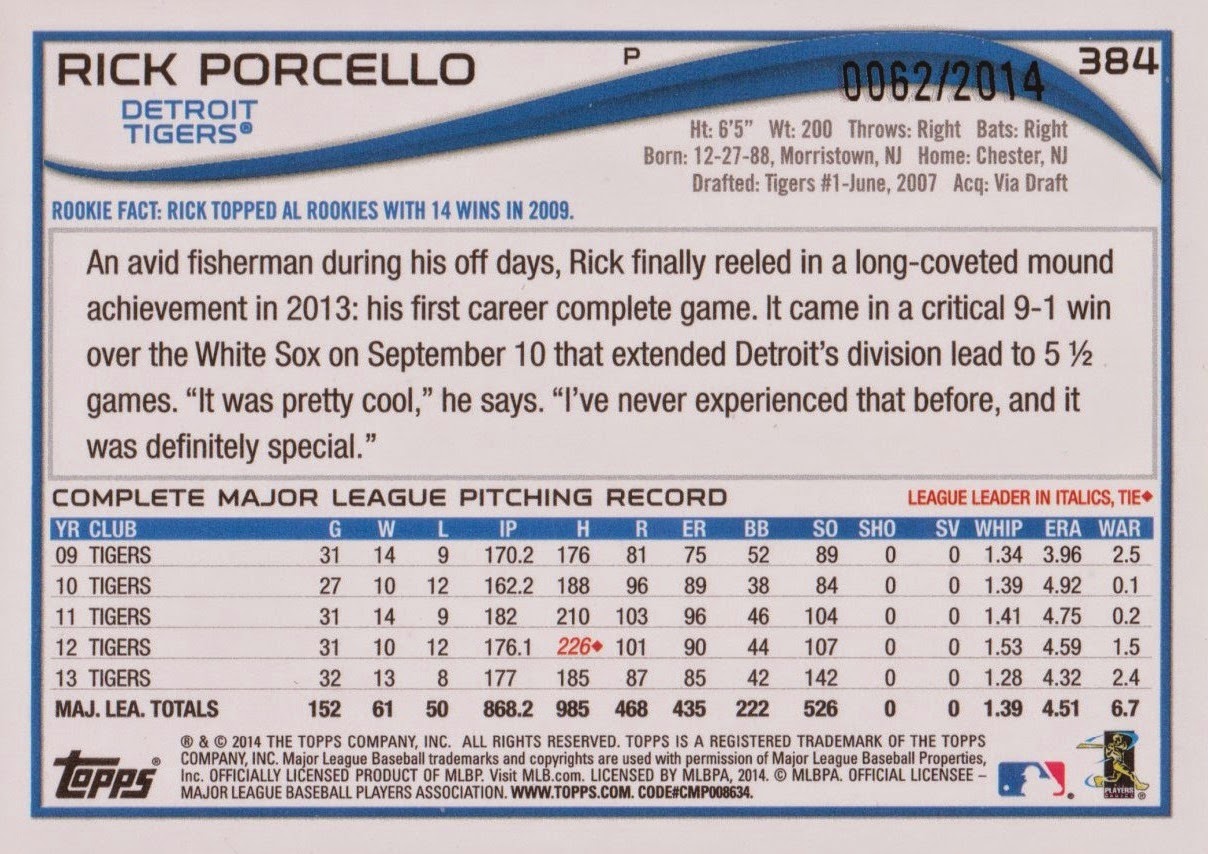 It is nice to see such a low serial number though.  I'm sure it would look nice in someone's collection of Tigers cards.  Overall the card is pretty nice, so I'm not disappointed.

The pack overall was a pretty nice one, I'm not sure what the insert rates are per pack, but it was nice to get a couple inserts in the same pack.  Since I didn't have such high expectations for the pack, it satisfied my itch to open a pack.  That itch won't be too bad for a while with Topps NFL cards out now, and I'm not sure what cards I need to add to my wantlist.

Now I just need to see what Royals cards are in the update series and finish that set, then maybe work on the other variations, specifically the blue ones.

Thanks for reading and hope you have a great evening.  As a heads up, I may not post in a couple days.  I am gearing up for the NCAA season and going to what will likely be my only Mizzou game of the year Saturday, and depending on how tired I am when I get home, I may not have time for a post.