My last post I showed off a jumbo pack of 2014 Topps football cards.  This time I will show off the box I got.  They had 2 options, one for $10 that had some blue border cards, or for $5 more you could get a box with a guaranteed relic card.  I opted for that, because I don't really need parallel cards, and plus it was still cheaper to pay $20 for this box and a jumbo pack then getting the bigger box that would have less cards. 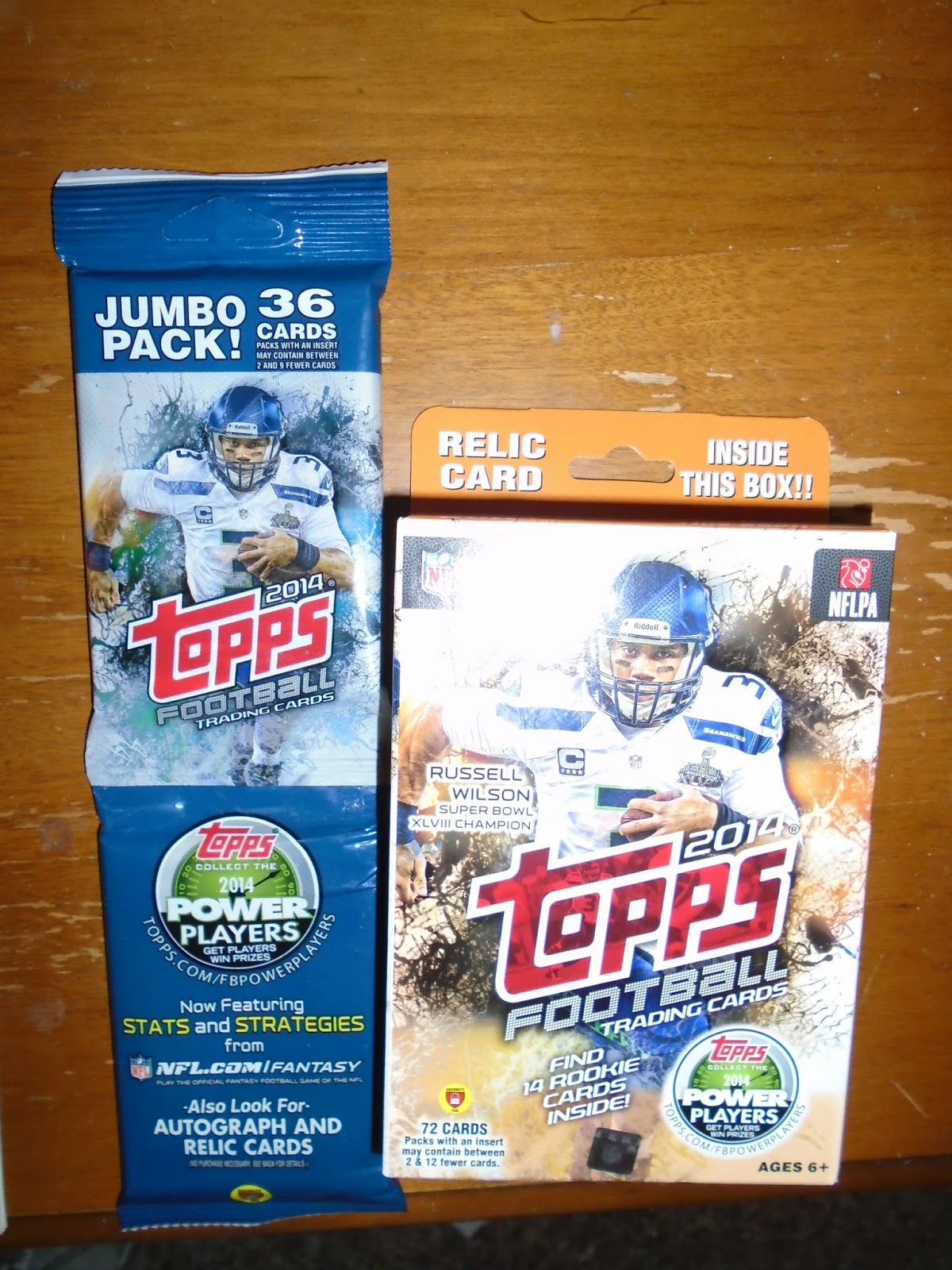 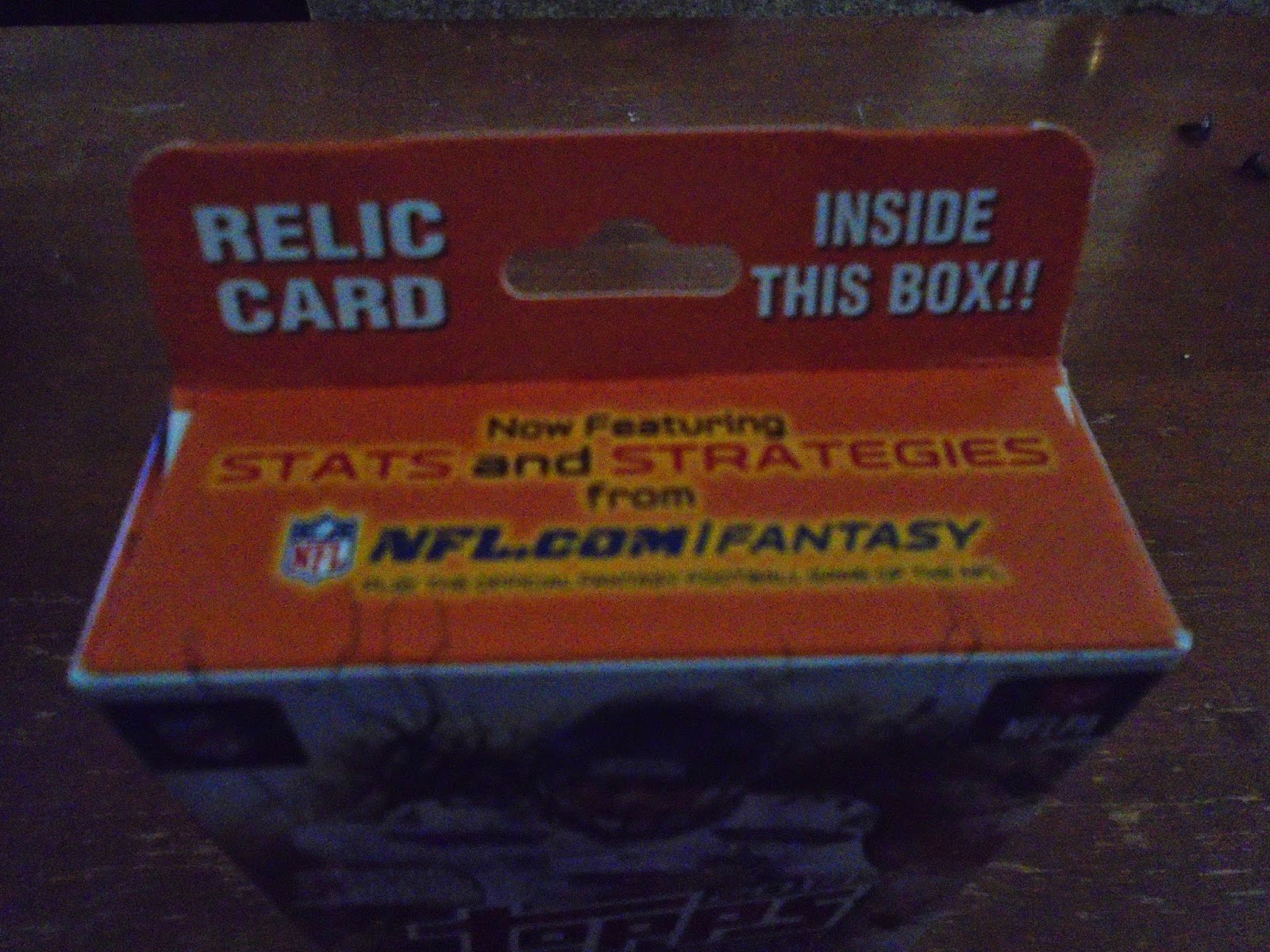 YAY, I'm learning how to move pictures around.  I'm starting to get the hang of this!

With a lot of cards, I won't scan them all, so like last time I will list the unscannables.

THREE KICKER CARDS!  That has to be some sort of record.  I like the Matty Ice card, but wish it wasn't horizontal.  Like I mentioned about Tampa cards in my last post, I am also phasing out my former Miami Hurricanes cards, so the Greg Olsen card while nice, isn't needed anymore.

Not bad, but not big names.  I might keep the Roberson one because I collect a few Rams cards.  Though I have no plans to collect a lot of them.

Some nice cards there.  Doubles of Peyton and Sherman, but still not bad. I remember when it was tough to get the bigger names, I'm glad to see they are more available.  If I never complete this set, it would be nice to at least get all the team cards. Never really tried to in previous sets, but already have a few to work with at least.

I think I will mention some of the inserts too instead of scanning.  If you saw the last post you saw some of the designs already.

I don't get why they are putting kids on ball cards.  There are players in the NFL that don't get cards, yet some kid can be on a card?  I will say I like the graphics on the PP&K card, but there is no need for this set or anything that is showing kids on cards.

The Torrey Smith card is a better Play 60 card than from the last post because at least he is do exercises in the photo.  The Power Players card has the same front as the base set, but with a Power Player logo on the front.  Seems like a waste to me. 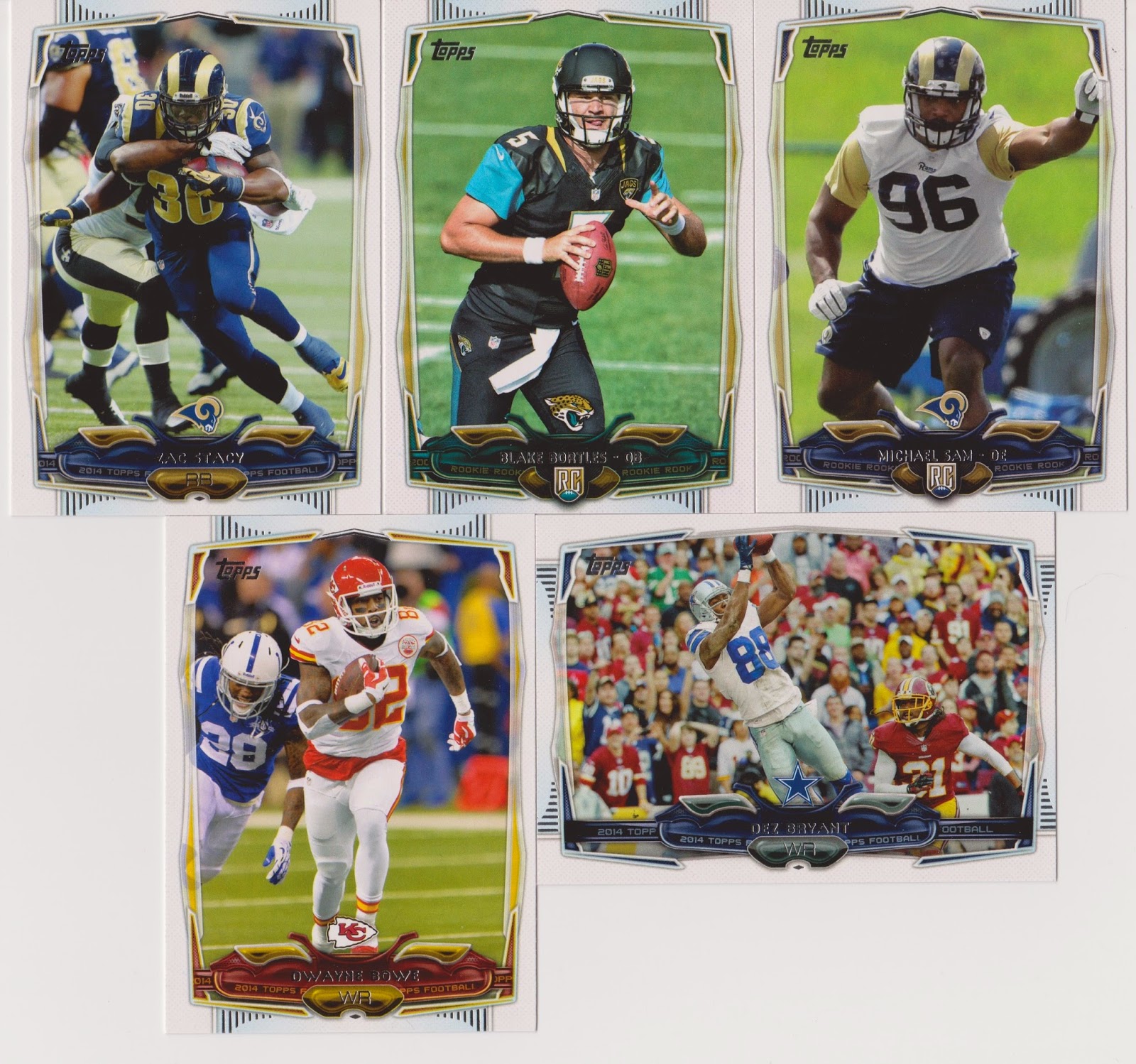 I like the picture on the Dez Bryant card. Wish it was a little zoomed out though.  Not a bad card of Blake Bortles either. The Dwayne Bowe card I can add to my Chiefs collection.  No big plans to expand it, but I have gotten a few in the last year.  Finally are a pair of Rams cards. the Michael Sam card I can add to my Mizzou collection, it will look nice with the Ealy one I got earlier.  One of the few Rams I really like is Zac Stacy.  So this was a nice addition.  I'm not going to rush out and buy all his cards, but this is a good one to have. 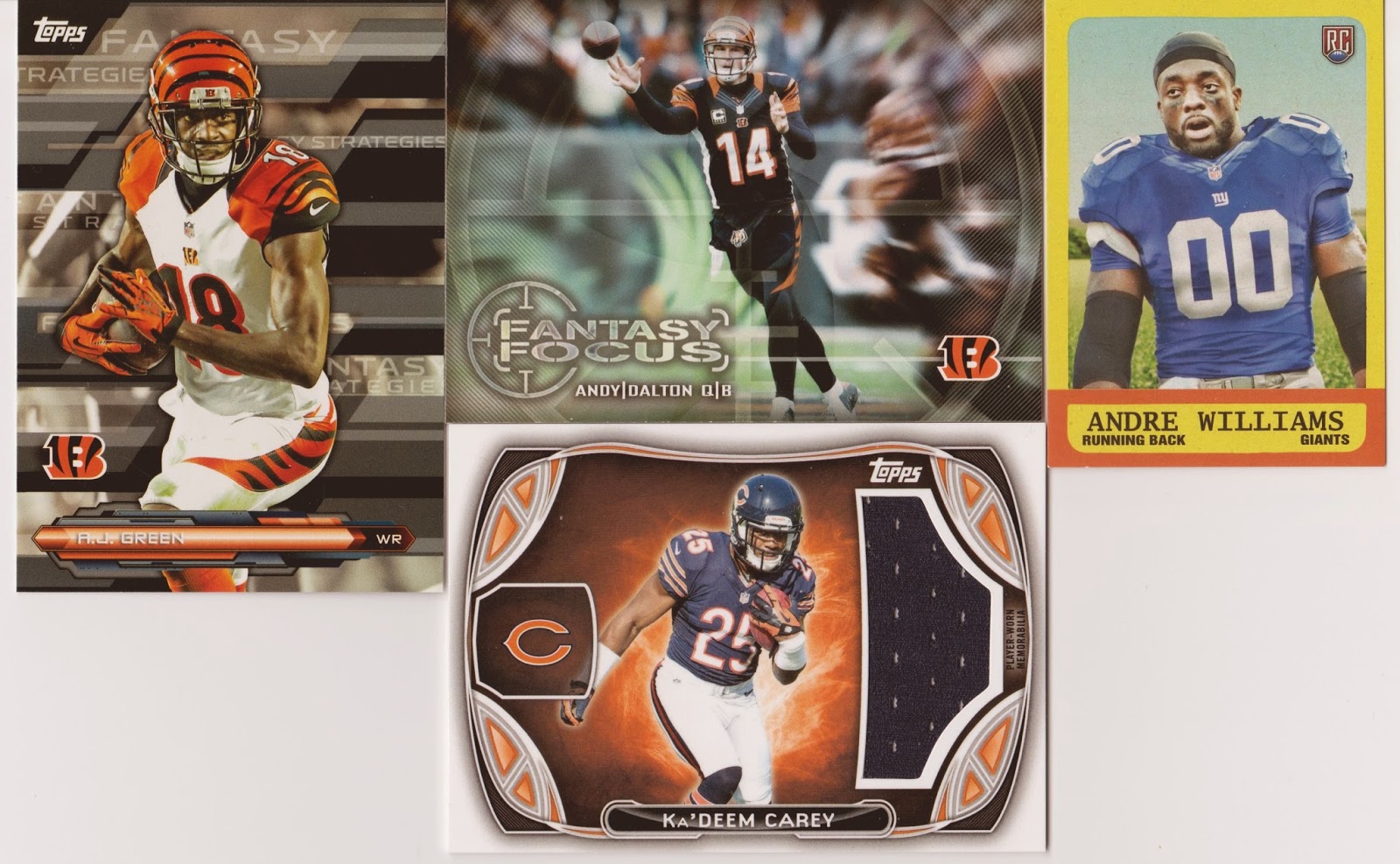 Here we go with the final cards.  First is another mini, this time of Andre Williams.  Still not a fan to be honest. The Fantasy Focus is ok, but again, I'm not a fan of it.  I just don't care for the design, and I'm not a big fantasy football guy.  I don't think focusing on fantasy football will interest ones who do participate to buy cards if they didn't already (much like the sabermetrics stats and sets in baseball).

A.J. Green is the focus of another Fantasy subset (odd both of the fantasy cards I got were of Bengals).  I like A.J. Green, and this design is much better, but still don't card for the insert.

Finally is the relic card.  I had not huge expectations, so I wasn't let down.  I don't know a lot about Ka'Deem Carey, but with a couple cards I got between this box and the pack, I hope he does well.

Overall I think I got my money's worth, I can't complain getting a couple Mizzou players and a few players I like.  I might just stick to seeing what cards I really want and getting them as opposed to completing the set.

I hope you enjoyed reading and have a great day.